In 1940, Booth-Henning, Inc, an aircraft dealership at Dallas’s Love Field, the brainchild of “Doc” Booth, a former Army flyer and avgas salesman Hall Henning was renamed Southwest Airmotive.  Following WWII, Southwest began supplying parts to the airlines, which had previously dealt only with manufacturers.  In 1950, the company also won a novel contract to overhaul piston engines for the U.S. Air Force.

In 1973, Cooper Industries acquired Southwest Airmotive and the following year merged it with Dallas Airmotive, which had been acquired in 1970. Standard Aircraft Equipment was added in 1975.

Southwest Airmotive – a trusted name in aviation – lay dormant in the history books for nearly three decades until September 5, 2004, when Dwight Cox resurrected the name and vowed to carry on the tradition of exceptional service at fair prices.

The ‘new’ company opened its doors on that September day in 2004 in a 1,200 sq.ft. rented facility on Dodge Blvd. in Tucson, Arizona with two experienced PT6 engine technicians.  Committed to becoming experts without distractions so often created when a young company attempts to be too many things to too many people, Southwest focused exclusively on the repair and overhaul of the Pratt & Whitney PT6 engine.  The company remains true to its vision and its commitment to the PT6 engine unifies the company and guides every decision.

The quality of work is Southwest’s greatest advertisement.  Other than one small publication, Southwest Airmotive does ZERO advertising and relies exclusively on word-of-mouth advertising from client to client.

As the opening decade to the millennium drew to a close, the company recognized that Southwest needed

The company’s relationship with SkyDive Arizona made the Eloy Municipal Airfield – convenient to both Phoenix and Tucson – a solid choice for relocation, and the company constructed a 10,000 sq.ft. facility adjacent to SkyDive Arizona.

The move was complete in 2011 and with business on the rise, Southwest added five technicians to its staff.

Immediately following the relocation, the company initiated negotiations with Test Logic, Inc. to construct a state-of-the-art engine test cell at the new facility in Eloy.  The test cell was completed in 2016.  The staff expanded as well to include seven technicians. 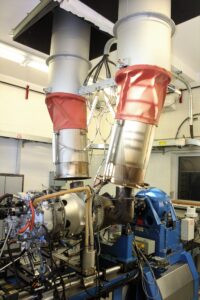 As Southwest concludes its second full decade of operations, the company understands the need to create new opportunities for additional business and is taking proactive steps in 2021 to make sure that happens.

The staff has long recognized that in-house NDT capability can greatly reduce downtime – anywhere from 3 to 5 days based on the nature of the job.  An NDT line can also maximize technician usage by eliminating ‘idle’ time as Southwest waits for authorization to proceed on inspected and quoted projects.  NDT requirements – currently out-sourced to Tucson – can be completed in-house.  Southwest has contracted a level III NDT specialist to build the NDT line within the existing facility. The company will hire a level II NDT specialist to train Southwest technicians, operate, and manage the NDT program at Southwest.  The NDT line is expected to be operational in July 2021.

In addition to the NDT line, the company knows that additional facility space can create opportunities for increased business.  Consequently, the staff has contracted Sunward Steel Buildings, Inc. to add 6,400 sq.ft. of space to the existing facility.  Among the most significant benefits expected from the additional space are 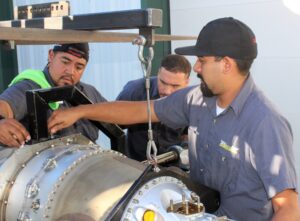 Southwest Airmotive is a family-owned and managed business, but not in a traditional sense.  Southwest considers every employee a family member, and each has a stake in the company.  Southwest employees always come first and that priority position is acknowledged with actions, not just words.  As Southwest would proudly match its employees against any group of staff and technicians anywhere in the world, the provides them with benefits to match the work ethic and attention to detail that each brings to Southwest every day of the year.  Southwest is proud of the way that its employees represent Southwest Airmotive when they are off-site in a business environment or working at the Eloy facility.